Keys to the Game Vs. Islanders 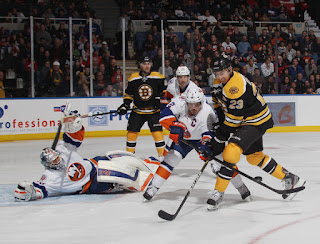 The Bruins come back home from New York city to go head to head with the New York Islanders. The Islanders are 2-1 losing the season opener to the New Jersey Devils. The Islanders beat then beat the Tampa Bay Lightning 4-3 and then beat the Toronto Maple Leafs 7-4. The Islanders goalie Rick DiPietro hasn't played yet this season. DiPietro, who has 9 years left on his 67.5 million dollar deal, could come back tonight against the Bruins. It's more likely though that 37 year old Russian goalie Evgeni Nabokov will get the start in net. Nabokov has started all three games for the Islanders posting a modest 3.02 Goals Against Average and a .907 save percentage. The Bruins are coming off an intense game versus the Rangers in New York. The Bruins spent most of the game battling back and managed to get the game into OT. Tuukka was solid in net and made a few spectacular saves. Horton scored his first of the year; hopefully shaking away some of his rust. Dougie Hamilton also got his first career point on a redirected goal by Brad Marchand. Now the Bruins will go up against one of the bottom feeders in the Eastern Conference. With the Rangers and Flyers both 1-3 and facing a mediocre team like the Islanders; I wouldn't be surprised to see Claude throw Anton Khudobin in net for the first time in the young season. The Bruins still have a few things they'll need to watch out for to win the game.

1) Quick start. The Bruins can end this game in the first period if they can get to the Islanders net minder early. By putting up a goal or two quick the Bruins can then do what they do best and play defensively. The Bruins can focus on shutting down John Tavares. Even though Tavares is the Islanders best scorer he probably wont be giving the Bruins the most trouble. Michael Grabner is perhaps the fastest man in the NHL and if he makes his way around our big defense man there isn't anything stopping him from scoring except Tuukka or perhaps Khudobin.

2) Don't be cocky. The Islanders are not a good team. Some of it is a remain of Mike Milbury's failure at GM (signing DiPietro, trading Loungo, trading Chara), some has to do with the coaching, and some of it has to do with the fact that the Islanders players just are not winning yet. As simple as the last one sounds; its true. The Islanders players are great but very few have been on winning teams. The stadium relocation in 2015 to Brooklyn could be all it takes to move the team over that hump. But as of now they are a bottom feeder in the Eastern Conference and I expect the Bruins to win tonight.

Before I sign off I wanted to talk about Aaron Johnson. This man has stepped in for Siedenberg in for two games and has done a great job. As a Bruins fan I love defense and I would hate to see all of Johnson's hard work neglected. He has played great defensively, you may remember his hip check on the 6'5 Dustin Byfuglien, and also hasn't been afraid to shoot the puck when necessary, ringing a post against the Jets. Johnson could be one of the best 7th man defense man the Bruins have had in a while and I like having him on board this years run at the Cup.