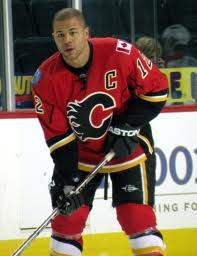 Earlier Sunday night the Pittsburgh Penguins completed a deal sending Dallas forward Brenden Morrow to the Penguins along with a 3rd round 2013 pick. Pittsburgh sent Dallas defense prospect Joe Morrow (first round draft pick) and a 5th round 2013 pick.

The Bruins proposed a trade of :


Per a source, Bruins offer that lost out to Pens for Brenden Morrow was Alex Khokhlachev & 2nd round pick csnne.com/blog/bruins-ta… #BruinsTalk
— Joe Haggerty (@HackswithHaggs) March 25, 2013

I would have been fine with that trade as I don't know much about Alex Khokhlachev, the Stars must have liked that Joe Morrow was drafted in the first round.

With all this news, this now leads Calgary Flames, Jerome Iginla in a prime spot for the Bruins to scoop up. Earlier Sunday, reports came out that Iginla would lift his no trade-clause for a trade to Chicago, Los Angeles, Boston or Pittsburgh. With Pittsburgh already making the trade for Brenden Morrow, I would assume they are out of the Iginla sweepstakes.

Now what does Calgary want in return for Iginla?


Source confirming that #CalgaryFlames are asking for TWO prospects and a draft pick for Jarome Iginla. No question, Iggy being shopped.
— Mark Spector Sports (@SportsnetSpec) March 25, 2013

Now the Bruins have an ample supply of quality prospects down in Providence, and a number of them have been called to the big club for limited game time action this season. Is Chiarelli and Julien just showcasing the talent?

Now the Bruins would probably part with any of their prospects for a player with the skill set of Iginla, even though he is old. The only player that seems untouchable is Malcom Subban.

We will see what the Bruins do, and will keep you updated as news surfaces.