They are the Big Bad Bruins. It's as simple as that. The Bruins need to get back to that. The B's have had a strong start to the season, but some third period losses that have come of late have been a result of a lack of physicality, and with it, a loss of energy, morale, etc. The Big Bad B's play their best when they live up to their name. They showed this against Washington the other night. The Bruins played one of their most bully-like games against the Caps, and went on to win with a comfortable 4-1 final score. During the game, like in almost any other that the Bruins play with this style, the Capitals just couldn't keep up, not only physically, but in the pace of the game. The Bruins' rough play forces the opposing team to act quickly, make mistakes, become intimidated, and just lower the level of their play. Doing so also helps out the team, boosting the morality of the players and fans, and letting the Bruins control, and even dominate play. The Bruins need to consistently play with this Big Bad style, as tough as it may be with such a short and jam packed season. Nonetheless, it's the style of play that needs to be executed by the Bruins in order to be successful throughout the remainder of the season. sources 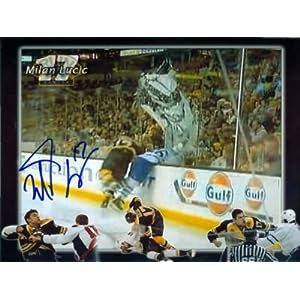