The Bruins go into game 7 with their back against the walls. The league is mocking them, Toronto is mocking them, and Bruins fans are as upset as they have been in years. Why? The series could have been closed out in game 5 at home. But the Bruins came out with no energy, emotion, or urgency. Then the Bruins lost in game 6 as well because they couldn't put the puck in the net. 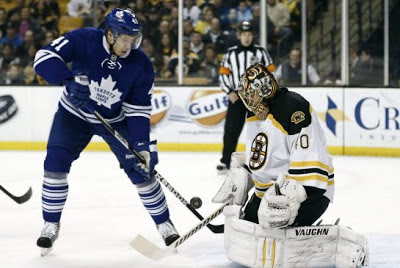 If the Bruins lose game 7 then they'll face the wrath of Boston and be the laughing stock of the NHL. If that doesn't motivate them then nothing can motivate this team and it'll be dismantled in the off season. Starting with Claude Julien.

If they lose a 3-1 series lead, to the Leafs who they've owned for years, then what does that tell you? Either they're not as good as we think or they're chock artists. It's hard to figure this team out. It's almost like they think they're better then they are and start to glide through things. As Claude said "We've been a Jekyll and Hyde hockey club all season". Ya Claude? Who's fault is that?

For the Bruins to win they need to score. The Bruins don't have enough talent and to make matters worse Claude Julien won't put the best lines on the ice. Julien continues to roll the same 4 lines even though they haven't been scoring goals. It's beyond everyone in Boston. Why can't the lines be changed? Everyone on the Bruins is just to comfortable. So is Guy Boucher, eyeing Claude Juliens job.