WOW. Really all that can be said about the Bruins game 7. All hope seemed lost even before the game started, with talks of off season moves and head coach firings. While those rumors aren't gone, they're at least postponed, because the Bruins are moving on to round two against the Rangers.

The game started off seemingly well for the Bruins when Matt Bartkowski scored the first goal of the game only 5 minutes in. It was especially good news since Dennis Seidenberg got injured only 37 seconds into the game. But then, just 5 more minutes later, the Leafs answered when Franson scored on Tuukka Rask.

The third period is when things got seriously crazy. Phil Kessel and Nazem Kadri both scored withing the first 5 minutes and 30 seconds of the third period. The score was 4-1 and fans were fleeing TD Garden embarrassed and ashamed.

But the Bruins were not done yet. Not Bergeron, Horton, or Lucic. Horton was the first to put the puck in the net, 9 minutes and 18 seconds into the third. For most people it seemed like to little to late, but for the Bruins it was a spark. 9 minutes later Milan Lucic scored a goal of his own, shutting up the doubters like me, for at least one game. With less then two minutes left the Bruins needed a goal, and Bruins fans wanted a story book ending, which they got. Patrice Bergeron scored the game tieing goal with only 51 seconds left and an empty net. You can see the video below.

In over time all of Boston was on the edge of their seats. Fans suddenly had to switch their train of thought from the off season back to real playoff hockey, and boy was it magical. Bergeron caped off the night and scored a goal with 6 minutes left. Sending the Leafs to the greens and the Bruins back to the practice rink. 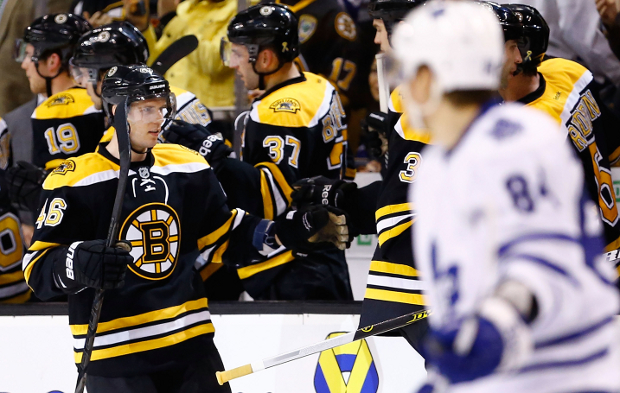