The Red Wings are coming 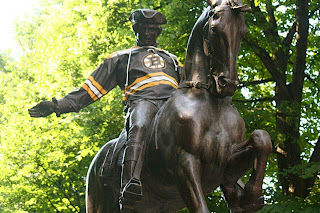 One of the most iconic statues in the city of Boston is of Paul Revere on horseback near the Old North Church. This figure of the early American hero who warned his fellow patriots of the arrival of British troops has in recent history managed to show his support of the Boston Bruins by donning his Black & Gold jersey emblazoned with the "8-spoked B". The image came to my mind as I thought about the red-shirted invaders from Detroit now joining the fray in the newly formed Atlantic Division. Suddenly I was transported back to a middle school history classroom. I could hear my teacher invoking the words of the poet Henry Wadsworth Longfellow... and my mind wandered.

"We find our Bruins at the start of their quest
For Lord Stanley's Cup facing Wings from the West.
And Paul Revere watches mounted in the North End
Ready at a moment's notice for a message to send.
He awaits the signal to come on that October day
Only a mere week and a half away.

One if by land, two if by sea
And three if by ice for our new rivalry.
The Red Wings are coming with speed and with might
With Datsyuk and Zetterberg and Cleary in flight.
Adding Weiss and Alfredsson into their midst
With Bertuzzi and Franzen, Helm and Nyquist.

So rise, Bruins Nation, to Revere's echoed cry
'Let's go Bruins!' shall fill the night sky.
Chara will lead our men into battle
TD Garden will tremble and end boards will rattle.
Tuukka skates quietly to defend his cage
And Looch stares off with silent rage.

Krejci and Bergy push the tempo, crash the glass,
Deke and drive and cut and pass.
Marchy flicks wrists, off the clock one tick
The puck rockets by Howard past the blade of his stick.
A dink off the post to the back of the net
Jimmy's head slumps, mask dripping with sweat.

The lamp is lit and Bruins fans roar
And out of the speakers 'Zombie Nation' will pour.
To arms! To arms! For the Cup we fight!
The Red Wings are coming. Welcome East... and good night."

I lifted my head off the kitchen table and rubbed my eyes. Was this a dream? A premonition? Then reality settled in. The season opener is still a week away on October 3rd and pits the Bruins against the Tampa Bay Lightning. We'll have to wait until Saturday the 5th for Paul Revere's next ride. 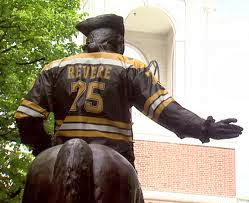