Does Iginla Have Enough Left in The Tank? 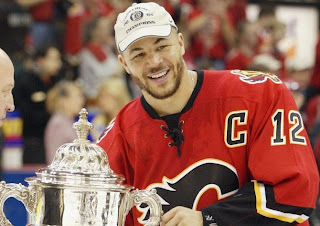 We all know the story, the Bruins thought they had Jarome Iginla at the trade deadline, but then were informed hours later that Jarome opted to go to the then surging Pittsburgh Penguins...and we all know what happened from there. The Bruins went on to trade for old man Jaromir Jagr and make perhaps the most memorable run for a cup, coming from behind down 4-1 with 10 minutes to go in game 7 of the first round and then going on to sweep that "powerhouse" Pittsburgh and eventually blowing it all in a matter of seconds in game 6 of the Stanley Cup Finals.

A month after the nearly historic postseason run the Bruins made a number of moves. If you haven't watched Behind the B I suggest you do, it puts some great insight into the offseason moves. First the Bruins let veteran defenseman Andrew Ference walk, then Nathan Horton decided he couldn't deal with the media in Boston and moved to Columbus. Then the fourth of July came where the Bruins lit the biggest firework trading "party boy" Tyler Seguin and Rich Pevereley to Dallas in exchange for Loui Eriksson. The next day the Bruins finally signed Jarome Iginla to a one year $6 million contract ($1.8 guaranteed).

So what exactly can expect from Iginla. Will fans hate him because of him opting Pittsburgh over Boston? At age 36, can Iginla still compete?

Again, in Behind the B, the Bruins met up with Iginla who provided some insight saying he chose Pittsburgh because at that time Boston was struggling and Pittsburgh was hot, do you think he regrets that decision? I would say so, and I don't blame him one bit for choosing Pittsburgh. If you had the choice between two great teams, one which was struggling and one which looked nearly unstoppable you would choose the later 9 times out of 10, don't deny it.

Anyways, what exactly can Iginla bring to the table? You can say Iginla didn't produce nearly as much last year as he had done in previous years, but it was a shortened season so we can give him the benefit of the doubt. He still managed to tally 14 goals and 19 assists during 44 games ( 13 games  with Pittsburgh with 5 goals and 6 assists). Also, Iginla was there in the playoffs playing all 15 games for the Penguins scoring 4 goals and 8 assists. That is not bad for an "old" man, much better stats than Jaromir Jagr.

So, will Iginla be that dominate player he was years back? I highly doubt it, the man is 36 years old and is not getting younger. However, he can still put up points and adds a nice compliment to the first line of Krejci and Lucic, or on the Second Line with Bergy and Marchand. Either way, the Bruins will once again have two very good first lines and a very strong defense. If the Bruins can finally figure out that hole in the third line there is no reason we aren't competing for the cup come May.

Now buckle up folks, because in 19 days the puck drops at the TD Garden and you know it will be rocking.

And to keep you guys entertained here's a video of Ignla's highlights: