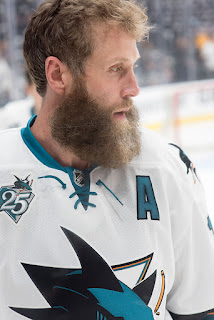 It was announced Friday that Joe Thornton, the player the Boston Bruins selected with the first overall pick in the 1997 draft, and former face of the franchise has signed a one year, $700,000 contract in Toronto, just I guess, to make it even weirder when the Bruins inevitably kick their ass in the playoffs again?

Look, I'd be lying if I didn't say that when the news broke a few months back that Jumbo was looking to be moved to a contender at the end of last season, I was hopeful that the Bruins would sign him. I always felt he was a great Bruin, and his trade, as lopsided and terrible as it was, (No offense, Marco Sturm, we still love you)  started the wheels in motion of assembling the group that would one day win the cup in 2011. Joe Thornton has always been, like Torey Krug is becoming now, one of those Boston Bruins that even though they were sent out of town under less than ideal circumstances, we still wish them well. Well, the Maple Leafs are gonna make that a little harder now. Or maybe, who knows, if the Leafs do manage to win it all, maybe seeing Joe Thornton raise the cup will make a Maple Leafs win just a little more palatable? Who knows, it could go either way. You know, until the Toronto Media gets revved up, and then I'll hate it for sure.

Either way, this whole thing still seems like a pretty big "what if." Joe Thornton is 41 years old, we don't know when or if the new season is starting up, and while his skill has never been in question, his best years are past him, and even in his best years, he always seemed like the kind of guy who has been secure enough in himself and his talent to not get too hung up over it if he never won a championship. And that's not a knock on the guy, honestly, it's a compliment. He just seems laid back, and the Toronto hockey scene, you know, isn't.

Still, for those of you who think it will be hard to see Joe Thornton in a Maple Leaf jersey, at least it won't be the ugliest sweater he's ever worn: 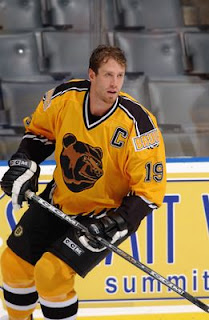 Leafs or no, best of luck to you Joe, Bruins fans everywhere are rooting for you.

Mostly to just get four goals in one game, but still.

The emotion is real.